The Silicon Prairie: How the Danforth Center is helping transform St. Louis into a Silicon Valley for plant science

On the evening of Saturday November 14, members of the Danforth Center’s premier giving group, the Danforth Society, were invited to a virtual event titled “Toast to Innovation,” which offered a chance to look back and celebrate how the Center has been able to foster a community of plant science innovation in St. Louis, and look ahead to all the great work still to come.

The event was hosted by one of the Center’s community members, Stephanie Reganon, executive director of innovation partnerships, and was a celebration of the impact of the Danforth Center and surrounding 39 North innovation community on the greater St. Louis region.

"Build it and they will come": Attracting new talent and companies to the region

There isn’t just one explanation for why so many agtech companies are setting up shop in St. Louis. There is a myriad of reasons, all having to do with the city’s thriving plant science sector that the Danforth Center is helping grow and develop. Thanks to the region’s cutting-edge facilities and community of experts, companies both large and small are establishing themselves here and investing in St. Louis.

Two years ago, after scouting many possible locations across the country, the largest sugarcane genetics company in the world, CTC Genomics, chose St. Louis as the spot for its North American research headquarters. More specifically, they choose BRDG Park, located on the Danforth Center’s campus. “After visiting multiple sites, our encounter with St. Louis was the perfect environment to attract talent, and access unique infrastructures and transformation expertise for our bold start in the U.S.,” said Diego Henrique Souza Ferres, Head of R&D at CTC.

Another internationally renowned company, KWS, has a similar story. They too considered many different locations all across the country, seventeen in fact, to serve as the home of their North American headquarters. Ultimately, the German seed company and fourth-largest seed producer in the world, chose St. Louis.

During Toast to Innovation, the audience heard from Orlando Saez the CEO of yet another company that realized St. Louis was the right place for them, Aker Technologies. Originally brought to the region as a member of the first IN2 agtech cohort, Aker, which develops cutting-edge crop monitoring equipment for farmers to increase their productivity, recently chose to relocate from Chicago to St. Louis permanently.

Orlando expressed his gratitude both for the IN2 program and for St. Louis itself, describing how the city facilitates innovation. “St. Louis is the right place to be for us, because it works,” he said. “When you need to innovate, you need the best – the best talent, the best support, the right place. St. Louis offers a great balance for emerging companies like us in agriculture.” 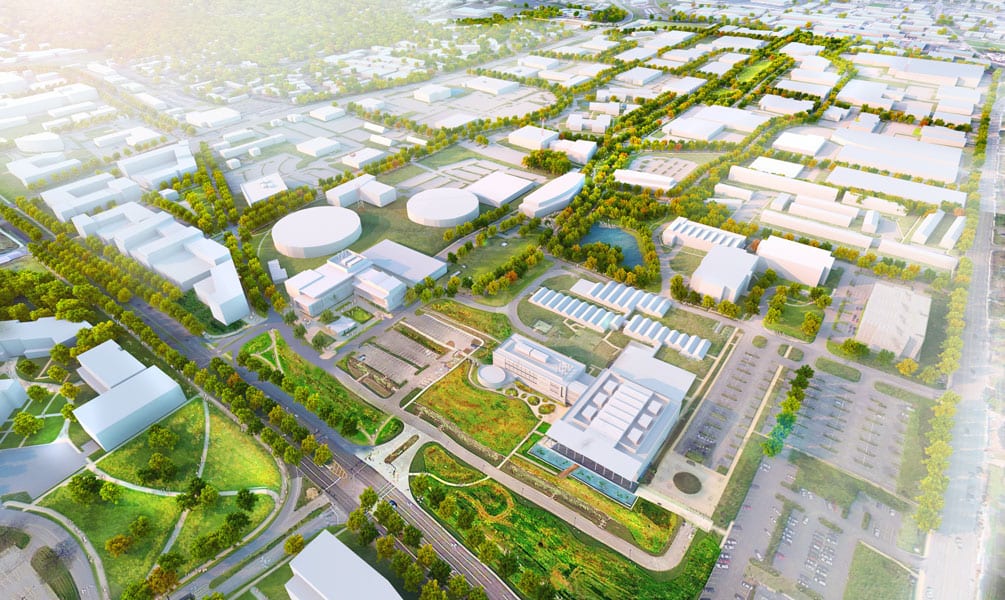 "Little house on the Silicon Prairie": St. Louis Grows Its Own

One of the main topics of the night was how the Center is fostering companies in the region through home-grown start-ups and spinouts. With the help of cutting-edge facilities and an environment that encourages innovation, Danforth Center scientists have been able to form companies of their own. These companies are bringing to life new and exciting developments aimed at improving the world through more sustainable agriculture.

One of these start-ups, RNAissance Ag, was started by two Danforth Center Scientists, Bala Venkata, PhD and Nigel Taylor, PhD. This company is focused on developing environmentally friendly insecticides to target specific pests, leaving humans and other insects unharmed. Another such company is Benson Hill. Co-founded by Todd Mockler, PhD, a Danforth Center principal investigator, the company offers Big Data solution to plant breeders’ problems the world over.

This summer, Benson Hill moved into its new headquarters: EDGE@BRDG, the recently completed building on the Danforth Center campus. In addition to seeing a brief walkthrough of the brand new, cutting-edge building, Toast to Innovation guests heard from Natalie DiNicola, Benson Hill chief of staff and a member of the Danforth Leadership Council, who told the story of Benson Hill and how the St. Louis region provided them the perfect environment to grow and thrive.

The success stories of Aker Technologies, RNAissance AG, and Benson Hill demonstrate the power of an innovation community. The Danforth Center, along with all of these spinouts and home-grown organizations, will continue to work to create a better planet and a stronger St. Louis.