Empowering Leaders and Improving Food Security Through the VIRCA Plus Project

Dr. Nigel Taylor, Associate Member and Dorothy J. King Distinguished Investigator, has been leading the Virus Resistant Cassava for Africa Plus (VIRCA Plus) project for most of the past decade. Nigel’s team, working with the Center’s Institute for International Crop Improvement (IICI) and collaborators at several African national agricultural organizations, have developed cassava varieties that resist two destructive virus diseases, cassava brown streak disease (CBSD) and cassava mosaic disease (CMD), which threaten food security and livelihoods of millions of smallholder farmers in East and Central Africa.

In June 2021, the project received approval from the key national regulator Kenya National Biosafety Authority (NBA) for the environmental release of the VIRCA Plus disease resistant cassava. The approval paves the way for conducting National Performance Trials and Distinctiveness, Uniformity and Stability (DUS) of the cassava, the final step of evaluating new varieties before they can be registered and released to farmers.

The VIRCA Plus Project is a collaboration between multiple research institutions, which has created the opportunity for the Danforth Center to collaborate with international plant scientists at various stages of their careers, including Dr. Catherine Taracha, Dr. Ihuoma Okwuonu and Dr. Henry Wagaba. When Dr. Catherine Taracha visited the Center as an established plant science leader, she trained and acquired expertise in the development of a regulatory dossier as well as regulatory applications that were required for the VIRCA Plus regulatory application in Kenya for the disease resistant cassava. When Dr. Ihuoma Okwuonu and Dr. Henry Wagaba came to the Center, they were early career scientists who both spent several years carrying out their PhD research at the Center. Both Henry and Ihuoma have gone on to become leaders and experts in their fields who use their skills to train more scientists in their home countries.

Keep reading to learn more about Dr. Catherine Taracha, Dr. Ihuoma Okwuonu, and Dr. Henry Wagaba, three leaders on the VIRCA Plus project who are inspired by the potential to alleviate food security in Africa.

Growing up in Kenya, cassava grew in abundance in and around Dr. Catherine Taracha’s village. Then, she saw it disappearing and cassava farming reducing. “My curiosity made me wonder why the cassava was disappearing,” she explains. “The farmers knew there was a disease that was affecting their crop but did not know how to control it.”

This curiosity led her to study Biochemistry and Biotechnology at Kenyatta University.  In 2016 Catherine arrived at the Danforth Center as part of her fellowship with the African Women in Agricultural Research and  Development (AWARD). “My experience at the Center impacted my future work,” says Catherine. “I was fortunate to work in Dr. Jim Carrington’s lab doing cutting-edge science.” At the Center she also gained experience with gene editing and has been able to bring those skills back to Kenya and help train more scientists and contribute towards policy development. Catherine has been able to advise Kenya Agricultural and Livestock  Organization (KALRO) on regulatory documents for the VIRCA Plus disease resistant cassava application in Kenya.

As Center Director of the Kenya Agricultural & Livestock Research Organization (KALRO) Biotechnology Center, she is a lead collaborator on the VIRCA Plus Project. She leads regulatory science for the project in Kenya and oversees research using biotechnology tools to help improve food security and economic development in Kenya. Her contributions to the VIRCA Plus project have been vital to its progress in Kenya. 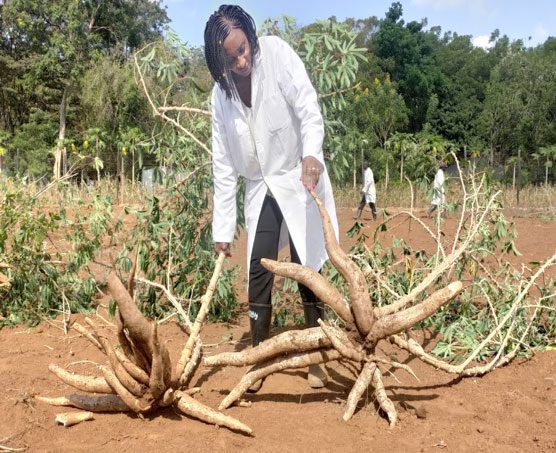 The VIRCA Plus Project and its progress in Kenya has been a major milestone for Catherine. “The approval from the Kenyan National Biosafety Authority brings the many efforts of international and regional organizations one step closer to the goal of delivering cassava with enhanced resistance to CBSD to farmers, contributing to Kenya's food security and economic growth.”

Catherine hopes the story of disease resistant cassava in Kenya will inspire scientists in other countries to embrace the transgenic technology. “With genetic engineering making successful progress so far in Kenya, I hope more researchers will be motivated to continue to push forward with their research,” says Catherine.

Join Dr. Catherine Taracha at AgTech NEXT on November 18, as she discusses The Consequences of Coming Up Short on Climate. Complimentary registration is available here.

“I am proud to be associated with the VIRCA Plus project,” says Dr. Henry Wagaba. “It has come so far. I am happy that I am able to say I collaborated on the project with so many other partners.” Dr. Henry Wagaba is a Plant Molecular Biologist at the National Agriculture Research Organization (NARO), where he leads a team of ten people in a tissue culture and molecular lab. In his role, he is involved with the cassava transformation platform, as well as virology, including performing diagnostics of CBSD in the field. 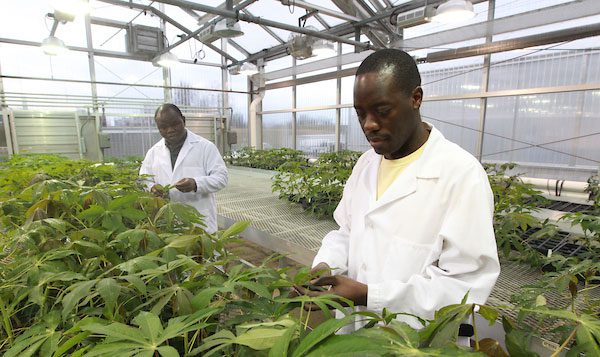 Henry first arrived at the Danforth Center in 2009 to complete his PhD. While training at the Center he split his time between the Plant Transformation Facility, the Plant Growth Facility, and Dr. Nigel Taylor’s Lab. Through his work with cassava and tobacco as a model system, he helped to discover new traits for resistance to CBSD. “The most impactful experience was getting traits that we tested in the model crop tobacco, to work perfectly in cassava. Discovering that those traits could be used to control a disease that is devastating cassava harvests back home, was the highlight of my experience at the Center.”

Since returning to Uganda, Henry continues to collaborate with the Danforth Center. Nigel frequently visits Henry and his team at the Namulonge research station to discuss ongoing field trials and experiments in the plant transformation facility. Henry says that the feedback and advice from Nigel has been essential to the success of their facility.

Henry played a major role in the research that resulted in the approval in Kenya and is inspired by the recent authorization of disease resistant cassava for national performance trials. In Uganda, there are no laws that allow for farmers to grow transgenic crops. “The impact will be huge if farmers are able to get those improved varieties,” explains Henry. He hopes that the approval in Kenya will also bring progress to Uganda. “It is a confirmation that we haven’t done this all for nothing. We will continue to build on that progress to have our story changed.”

“I want to make an impact on the world,” says Dr. Ihuoma Okwuonu. “I believe I can make an impact by developing products that will improve the lives of people in Nigeria.” Today, Ihuoma is doing just that. In her role as a Chief Research Officer at the National Root Crops Research Institute (NRCRI), Ihuoma is leading the biotechnology research program. She also serves as principal investigator on some of the current collaborative projects that NRCRI has with the Danforth Center.

In 2007, Ihuoma came to the Danforth Center as a student trainee under the VIRCA Plus project in Dr. Nigel Taylor’s Lab. A few years later, she returned to complete her PhD. Her time at the Center helped her gain more experience in the lab, as well as leadership skills. “It was an eye opener,” she says. “It was the opportunity of a lifetime. I was able to gain hands-on experience in microbiology and plant transformation.” In addition to the lab experience, Ihuoma built relationships with scientists throughout the world, some of which are still her collaborators today. 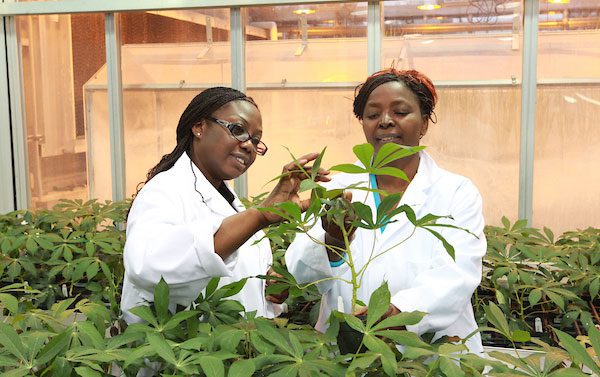 Ihuoma works with researchers in the VIRCA Plus project to develop cassava varieties that are popular in Nigeria with elevated levels of iron and zinc to combat micronutrient deficiency, a global threat to human health, with particularly severe impacts in Africa. In Nigeria, 75 percent of preschool children and 67 percent of pregnant women are anemic, and 20 percent of children below five years suffer from zinc deficiency. Iron deficiency anemia affects the immune system, stunts growth and impairs cognitive development in children, while deficiency in zinc causes increased risk of death from diarrhea, stunting and reduced cognitive development. She hopes they can develop cassava that is both disease resistant and nutritionally enhanced.

To identify the impact of food processing on mineral levels in the biofortified cassava, Ihuoma showed her colleagues at the Danforth Center how to prepare gari and fufu, two common West African foods, by chopping, soaking, fermenting, pressing and roasting cassava. They found that high levels of iron and zinc were retained through these cooking processes and remained available for absorption in the gut following digestion. Ultimately the biofortified cassava could provide as much as 40-50 percent of nutritional requirements for iron and 60-70 percent of nutritional requirements for zinc for children and women. 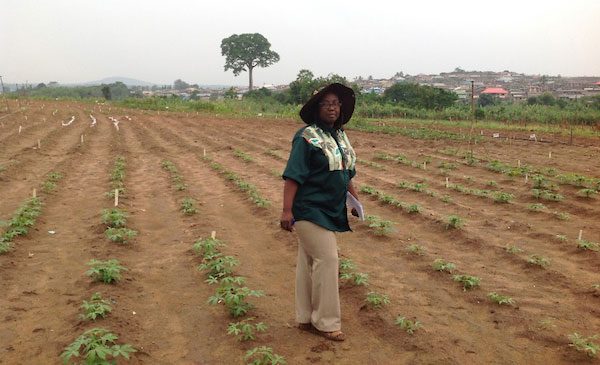 Dr. Ihuoma Okwuonu standing in a VIRCA Plus cassava field in Umudike, Nigeria

Ihuoma says the biggest impact her training at the Danforth Center had on her professional development was improving her self-confidence. Upon returning to Nigeria, that confidence helped her grow into a leadership position. “I returned to Nigeria and I was given the responsibility to manage labs and people. I could lead and organize research on national and international projects. The training and confidence I gained at the Danforth Center helped me do that.”

Join Dr. Catherine Taracha at AgTech NEXT on November 18.