Through the power of plant science, Danforth Center scientists are helping to create a better future. Here are some of the stories (so far) about the impact our science is having at home and around the world. 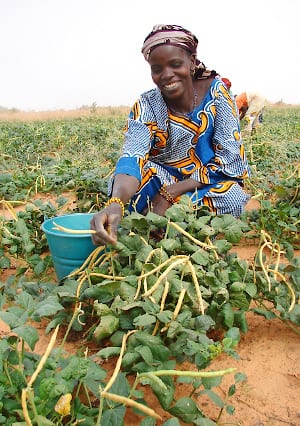 Imagine working all year in the field only to have your crop fail. This is the reality for many farmers around the world.

Chimara is a bean farmer in rural Abia, Nigeria. She supports her family and makes enough money at market to send her daughter to school. Last year, despite all her efforts, her crop was destroyed by a voracious insect pest.

Such crop failures are the reality for Nigerian bean farmers. But now, thanks to a team including the Danforth Center, a new pest-resistant variety has been approved for market, promising smallholder farmers like Chimara a brighter future.

Improving the productivity and profitability of smallholder farming in the developing world has been shown to reduce poverty and increase economic security. The Danforth Center has a mission to improve the human condition through plant science, and our scientists are using plant science to help end hunger and improve livelihoods.

Why It Matters to Us All
Population growth and rising standards of living mean that in just a few decades—by 2050—the world will not have enough land and fresh water to grow the food we need. Shortage can lead to instability and unrest. That’s why the work of the Danforth Center is so important. With your help, Danforth Center scientists are helping to develop drought- and disease-resistant crops so that farmers can grow more food… and sustainably feed the world.

Danforth Center scientists tackle improving crops that benefit the developing world, crops that for-profit companies might pass by. These so-called “orphan crops” include things like: 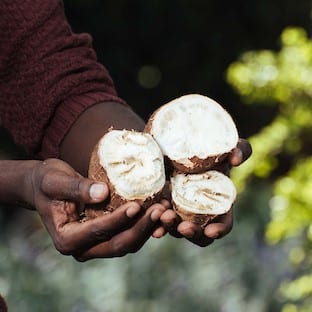 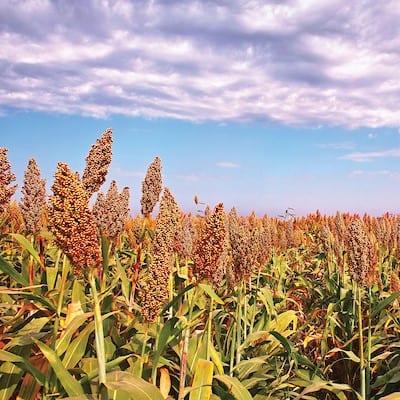 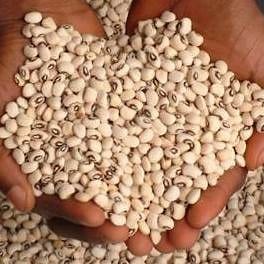 Cassava, a root vegetable cultivated in some 40 African nations. It is the major source of all calories for 2 out of 5 Africans, but is susceptible to a terrible virus.

Sorghum, a drought-resistant grain native to North Africa. It is second only to maize throughout Africa, but hasn’t received modern improvements like its better-known cousin.

Black-eyed peas, a major source of affordable protein in Africa, but liable to destruction by the pod borer insect… until now… 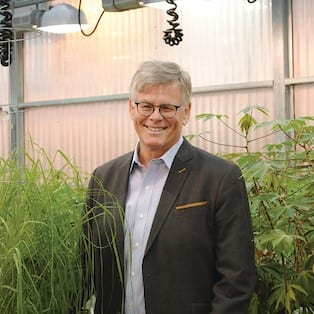 "Not only will yields increase dramatically, but farmers can significantly reduce pesticide use, which will benefit farmers' health, as well as the environment." 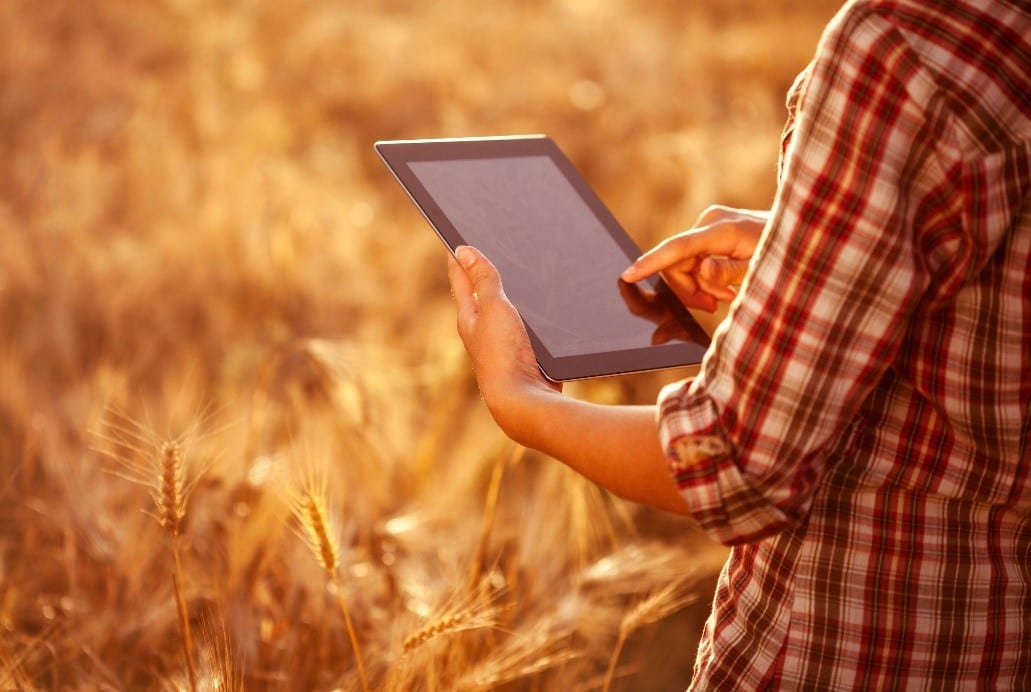 Farmer using a computer tablet in the field. Sustainable ag utilizes cutting-edge technology to reduce water and input use. 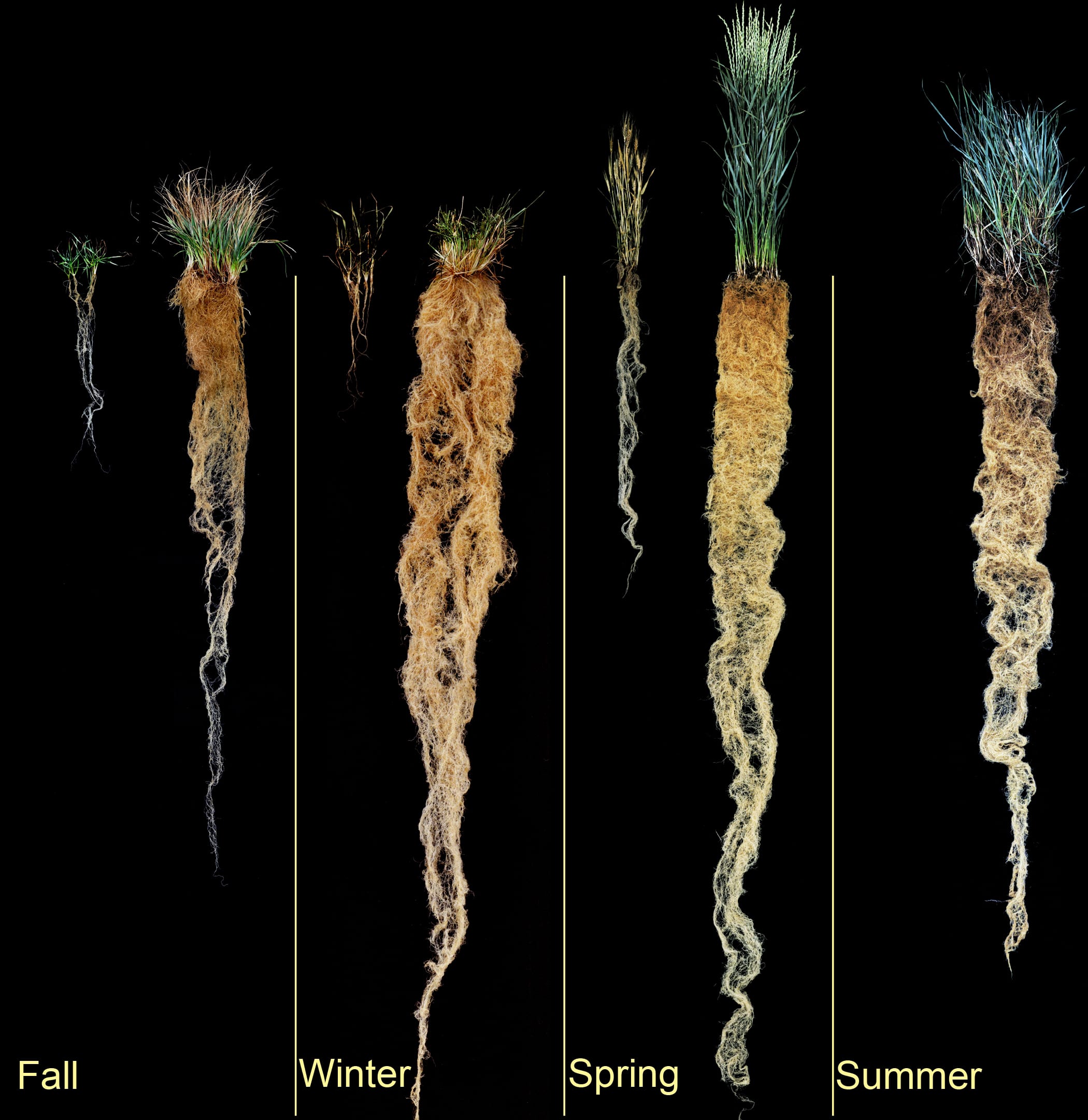 Jaxon grew up on the family farm in central Illinois, learning about irrigation and fertilizer and pesticide application at his grandfather’s side. Today, he is part of the “next wave” of farmers seeking sustainable solutions to improve the land for the next generation. Danforth Center scientists want to help…

Food security is about feeding people, but it is also about being responsible stewards of the natural resources on which all agriculture depends, such as water and topsoil. Agriculture today is the world’s largest ecosystem and the leading cause of biodiversity loss. It uses too much water, requires too many inputs, and erodes the topsoil. It just isn’t sustainable.

Over the last 10,000 years, humans have domesticated a few thousand plants. Today, only a handful of crops provide the majority of all human food. Contemporary crops were selected primarily based on what they produced for humans. Danforth Center scientists are asking: What if we developed crops that could feed people and help the environment too?

Toward a Sustainable Ag
Danforth Center scientists in the lab of Allison Miller, PhD, are part of a project that seeks to identify wild perennial plant species that are strong candidates for growth as food crops.

Perennial plants live for multiple years and can be harvested many times over the course of their lifetimes. They offer many potential benefits in agriculture. They reduce tilling, thus reducing both production costs and erosion. They increase season-over-season yield. Perennials also create deep root systems, which fix carbon, reduce water needs, and help restore soil health.

Many perennial crops already exist in agriculture, such as fruit trees and some animal forage like alfalfa. However, nearly 70 percent of farmland is currently dedicated to annual agriculture, mostly in grasses (cereals), legumes (soy, beans), and oilseeds (sunflower, flax, etc.). 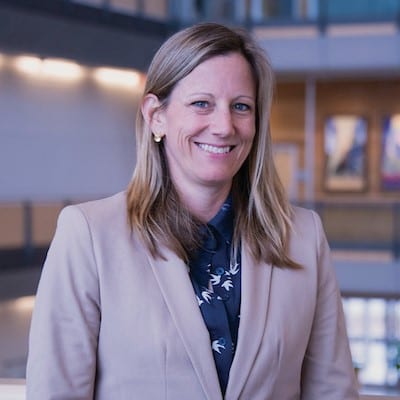 “Imagine the positive environmental impact if we could convert even a fraction of crops to perennial varieties.” 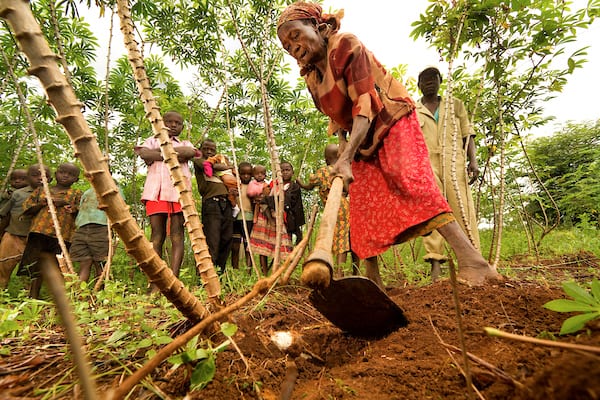 When Kebi’s grandson fell sick in their rural village outside Umudike, Nigeria, the nurse told her that despite his well-fed appearance, the young boy was suffering from iron deficiency. Researchers at the Danforth Center hope to change that…

When children lack essential vitamins and minerals, even if enough calories are consumed, the resulting malnutrition can cause illness, stunted growth, and impaired cognitive development. Doctors sometimes call this micronutrient deficiency the “hidden hunger.” Inadequate iron and zinc has particularly severe impacts in Africa. In Nigeria, for example, 75 percent of preschool children and 67 percent of pregnant women are anemic, and 20 percent of children below five years suffer from zinc deficiency.

The Danforth Center’s Narayanan Narayanan, PhD, research scientist, and Nigel Taylor, PhD, Dorothy J. King Distinguished Investigator, are working for change. Their project, VIRCA Plus, is an international collaboration to develop cassava with significantly higher levels of iron and zinc.

Improving cassava has been a long-term passion for scientists at the Danforth Center. Cassava is a staple crop throughout Africa and Asia. More than 500 million people in Africa depend on cassava for their daily calories. Improved cassava will benefit millions of people, especially women and children like Kebi’s grandson. 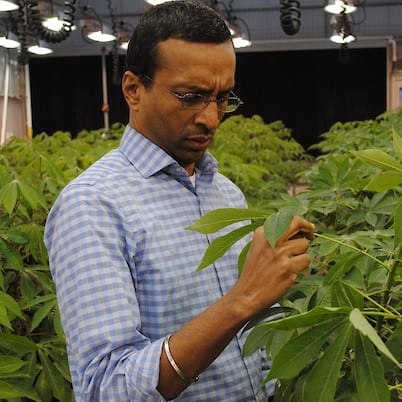 “Enriched cassava could benefit so many people in Africa. It’s rewarding to work on something that can make such a positive impact in people’s lives.”

The VIRCA Plus team published a paper earlier this year showing that the elevated minerals persist even after food preparation. They are now working to integrate the trait into popular varieties. Field trials are currently in progress in Nigeria. 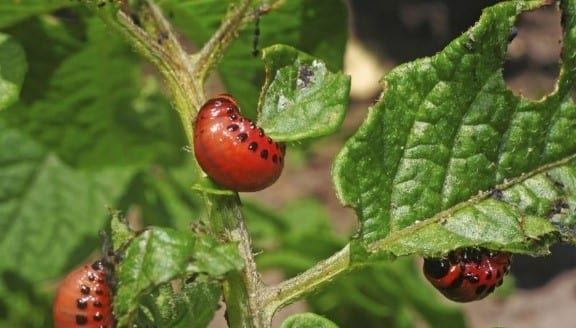 Once upon a time, chemical pesticides were used in a broad-spectrum approach that killed beneficial insects along with the crop pests. Now, thanks to a cutting-edge technology developed by Danforth Center scientists, a greener era may be dawning… 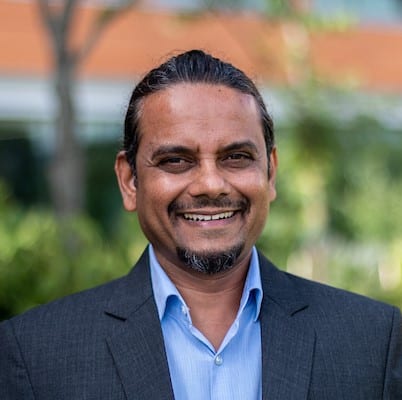