ST. LOUIS, MO, September 9, 2019 - The U.S. Department of Energy (DOE) through its Office of Biological and Environmental Research (BER) has launched a major initiative to develop bioenergy crops through genomics-based research. Danforth Center Principal Investigator, Andrea Eveland, Ph.D., will lead a multi-institutional project under this initiative to deepen the understanding of sorghum, a versatile bioenergy crop, and its response to drought.

Sorghum is the fifth most widely grown cereal crop worldwide and the third largest in the U.S. It has natural resilience to drought stress and excessive heat, which is attractive for developing bioenergy feedstocks for production on marginal lands. Eveland’s project explores the gene regulatory networks underlying this amazing stress resilience in sorghum, and seeks to define the functions of key genes. Drought tolerance is a complex trait and understanding its regulation in the broader context of the whole plant and its environment will require advanced approaches in genetics, genomics, phenotyping and gene editing.

“There are more than 30,000 genes in the sorghum genome and we only have knowledge of what a small fraction of them do, and most of that is derived from other unrelated plant systems,” said Eveland. “This is a grand challenge facing biologists now – to define the function of every gene in the genome.”

To get a handle on how specific genes function, Eveland and collaborators will use a classic method called ‘forward genetics’, where chemically-mutagenized sorghum plants are screened for altered physical characteristics (phenotypes) in response to drought. Each plant carries one or more changes in its DNA compared to un-mutagenized controls, and each mutant’s genome has been sequenced so that mutations in specific genes can be linked with the observed phenotypes.

Although scientists have been conducting forward genetic screens for decades, they tend to be biased towards discovery of genes that have severe effects on plant growth and development since this is what can be easily scored. What is unique about Eveland’s project is that high-resolution, sensor-based field phenotyping will be conducted on the mutagenized sorghum plants throughout their entire growth cycle, from seedling establishment to harvest, and all of those data will be analyzed to link phenotype with mutant genotype.

This new research will leverage a field-based phenotyping infrastructure at the University of Arizona's Maricopa Agricultural Center, which was funded by DOE ARPA-E in the TERRA-REF project led by Todd Mockler, Ph.D., Geraldine and Robert Virgil distinguished investigator at the Danforth Center, who is also collaborator on this new project.

“The TERRA-REF field scanner system collects high-resolution images to identify a crop’s phenotypic traits using a variety of sensors throughout the growing season. The facility at Maricopa provides an exceptional capability for managed stress trials in a hot and arid environment through controlled irrigation,” said Mockler.

State-of-the-art phenotyping data analytics pipelines have been developed as part of other DOE-funded initiatives at the Danforth Center and will be used to extract information on physical traits, including multi-dimensional traits and those not immediately visible to the naked eye, such as light reflectance. Advanced genomics and gene editing methodologies will be used to help guide predictions of gene function in sorghum.

Joining Eveland and Mockler as collaborators on this project are Duke Pauli, Ph.D., University of Arizona, and Brian Dilkes, Ph.D., Purdue University. The three-year $2.7 million project is supported by DOE’s Genome-Enabled Plant Biology for Determination of Gene Function program.

“This is a really exciting project to be involved in as it builds on the experience and knowledge we have gained through TERRA-REF as well as leveraging a fantastic team,” said Pauli, assistant professor in the School of Plant Sciences at the University of Arizona. This project will enable us to really push the boundaries of what is possible with abiotic stress physiology under real-world conditions that will be similar to future climate predictions.” 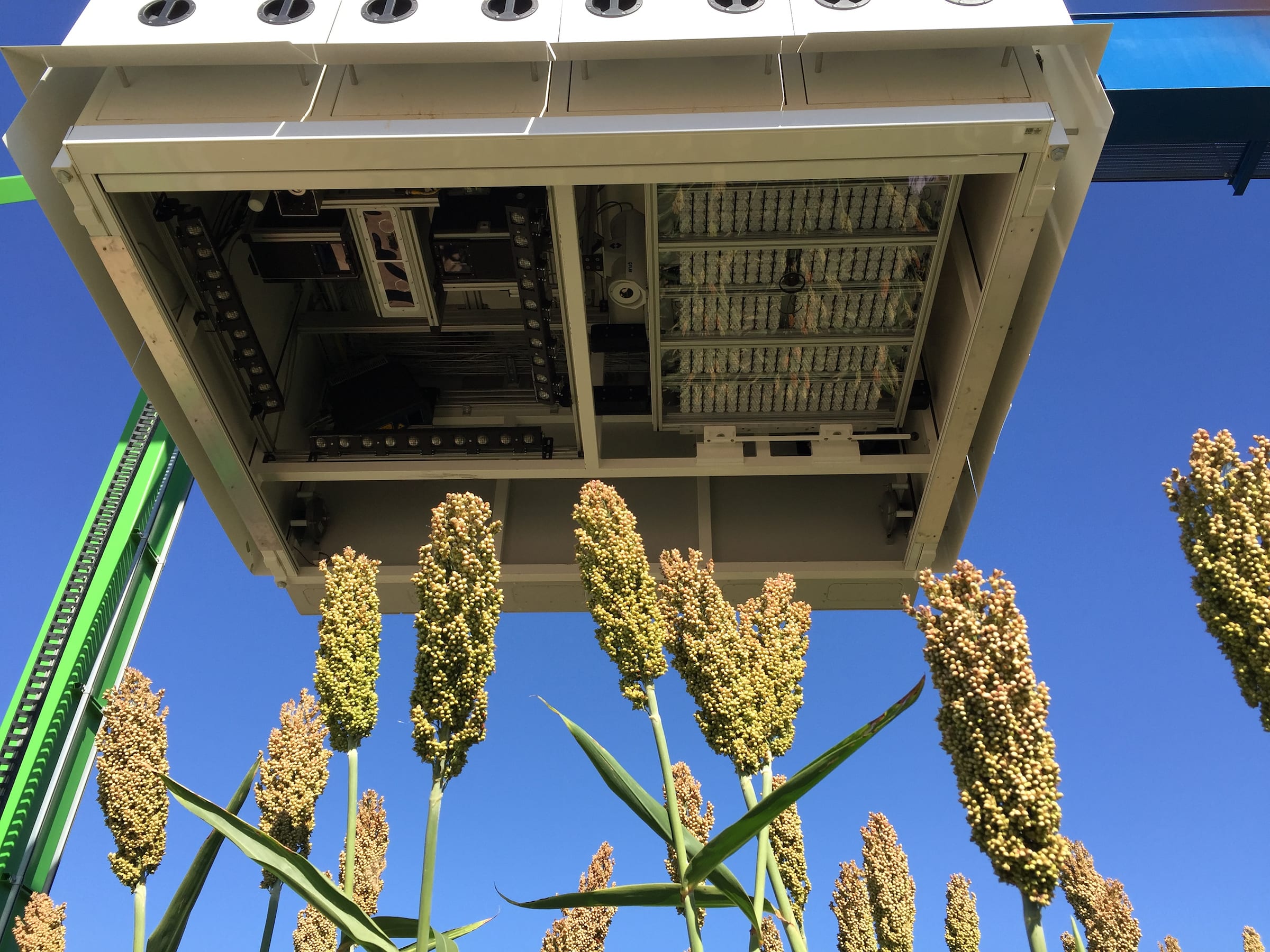 About the Donald Danforth Plant Science Center
Founded in 1998, the Donald Danforth Plant Science Center is a not-for-profit research institute with a mission to improve the human condition through plant science. Research, education and outreach aim to have impact at the nexus of food security and the environment, and position the St. Louis region as a world center for plant science. The Center’s work is funded through competitive grants from many sources, including the National Institutes of Health, U.S. Department of Energy, National Science Foundation, and the Bill & Melinda Gates Foundation. Follow us on Twitter at @DanforthCenter.