Recently, a collaborative group of plant researchers led by Danforth Center scientists published a study that showed it is possible to improve cassava, a root vegetable, to be fortified with higher levels of zinc and iron. This discovery has the potential to impact many people in Africa where cassava is a staple crop. One-third of the population relies on cassava for over 50% of their daily caloric intake, yet it does not contain the key nutrients iron and zinc at levels that are adequate to meet minimum daily requirements, especially for women and children. In Nigeria, 75 percent of preschool children and 67 percent of pregnant women are anemic, and 20 percent of children below five years suffer from zinc deficiency.

For many of the scientists involved in this study, improving cassava has been a long-term passion. Dr. Narayanan Narayanan, a scientist in Dr. Nigel Taylor’s lab, has been working with the crop for over twelve years.  “It’s exciting to see something happen in the lab that has the potential to make a positive impact in lives of people. This research could benefit lots of Nigerian women and children,” said Narayanan.

Narayanan’s passion for cassava stems from his years of working on rice in Southeast Asia. On a fellowship in Philippines, he was studying how to make rice resistant to two major bacterial and fungal diseases. His experience there fueled his future career in cassava, “I still remember the night I made my first transgenic plant. That’s when I began developing an interest in plant biotechnology,” he says. As he was living in the Philippines, he saw how many people rely on rice as staple food, and how many farmers made their livelihood from growing rice. It was inspiring to see how his research could go from lab, to field, to plate. 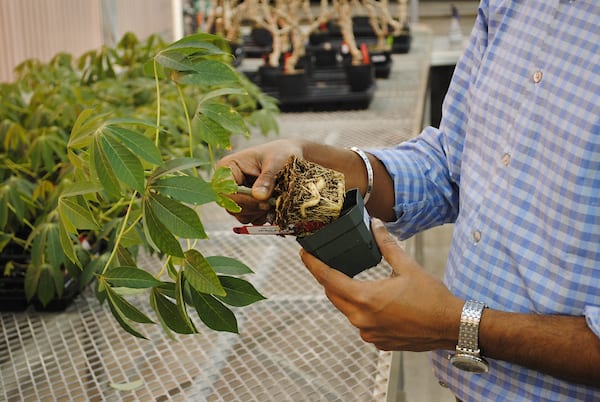 Today, Narayanan’s work has the potential to enhance the plates and the health of people living in Nigeria. Not only did the research demonstrate that it is possible to increase the nutritional value of cassava, but the higher levels of zinc and iron were still present after being cooked into common dishes. In an article written by World Food Prize Winner Jan Low, Marc Ghislain and Tawanda Muzhingi, they emphasized how incredibly important this discovery is, “When they processed transgenic cassava into gari and fufu, the most popular cassava foods consumed in Africa, they observed excellent retention of iron and zinc. This finding is in stark contrast to non-transgenic cassava bred for higher vitamin A content.”

While this project still needs to pass through regulatory approvals, a goal taken up by the VIRCA Plus Cassava project, the future is bright. “Combined with efforts to diversify food baskets of populations at risks, the biofortified cassava reported by Narayanan et al. could make a substantial contribution to better health for at-risk populations who rely on cassava as a staple,” explains Low, Ghislain and Muzhingi. As this project continues to evolve, Narayanan hopes to visit Nigeria to meet with the small stakeholder farmers that grow cassava and the communities that rely on it for food. “In the future, I’d like to see this technology expand into different crops and regions,” he explains.

To learn more about the ongoing work of the Danforth Center and the VIRCA Plus Cassava partnership, visit cassavaplus.org.