When Kebi’s grandson fell sick in their rural village outside Umudike, Nigeria, the nurse told her that despite his well-fed appearance, the young boy was suffering from iron deficiency. Researchers at the Danforth Center hope to change that.

When children lack essential vitamins and minerals, even if enough calories are consumed, the resulting malnutrition can cause illness, stunted growth, and impaired cognitive development. Doctors sometimes call this micronutrient deficiency the “hidden hunger.” Inadequate iron and zinc has particularly severe impacts in Africa. In Nigeria, for example, 75 percent of preschool children and 67 percent of pregnant women are anemic, and 20 percent of children below five years suffer from zinc deficiency.

The Danforth Center’s Narayanan Narayanan, PhD, research scientist, and Nigel Taylor, PhD, Dorothy J. King Distinguished Investigator, are working for change. Their project, VIRCA Plus, is an international collaboration to develop cassava with significantly higher levels of iron and zinc.

Improving cassava has been a long-term passion for scientists at the Danforth Center. Cassava is a staple crop throughout Africa and Asia. More than 500 million people in Africa depend on cassava for their daily calories. Improved cassava will benefit millions of people, especially women and children like Kebi’s grandson. 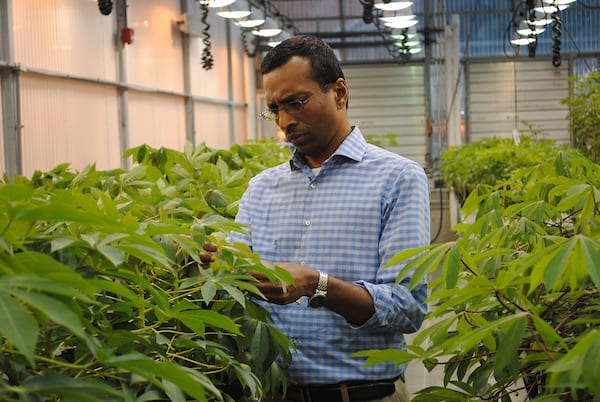 Enriched cassava could benefit so many people in Africa. It’s rewarding to work on something that can make such a positive impact in people’s lives.Narayanan Narayanan, PhD

The VIRCA Plus team published a paper earlier this year showing that the elevated minerals persist even after food preparation. They are now working to integrate the trait into popular varieties. Field trials are currently in progress in Nigeria.

Learn More About VIRCA Plus

When you support the Danforth Center, you are helping find sustainable solutions to some of the 21st century’s most pressing challenges. Please consider a gift to the Impact Fund today.