Creating a Food Oasis, Here and Around the World: Part of the Danforth Mission

Here’s something we can all agree on: food is wonderful.

It’s the foundation of a healthy life and something everyone on Earth deserves. Yet an increasing number of people in our world are going to bed hungry each night. In fact, during the COVID pandemic, numbers of food insecure people have more than doubled.

At the Danforth Center, we’re working to find sustainable solutions to this problem. Our scientists conduct research on crops that play a major role in food insecure regions with a goal of improving them—helping them grow in harsh conditions, making them resilient to diseases and pests, and increasing their nutritional value. Through our work, we seek to empower farmers and ensure millions of people can live healthy, full lives.

Recently, the Danforth Center archived a major success in this effort by helping deliver an improved variety of a West African staple crop into farmers’ hands. The crop is known to scientists as “cowpea,” but you might recognize it as black-eyed peas.

Meat for the Poor 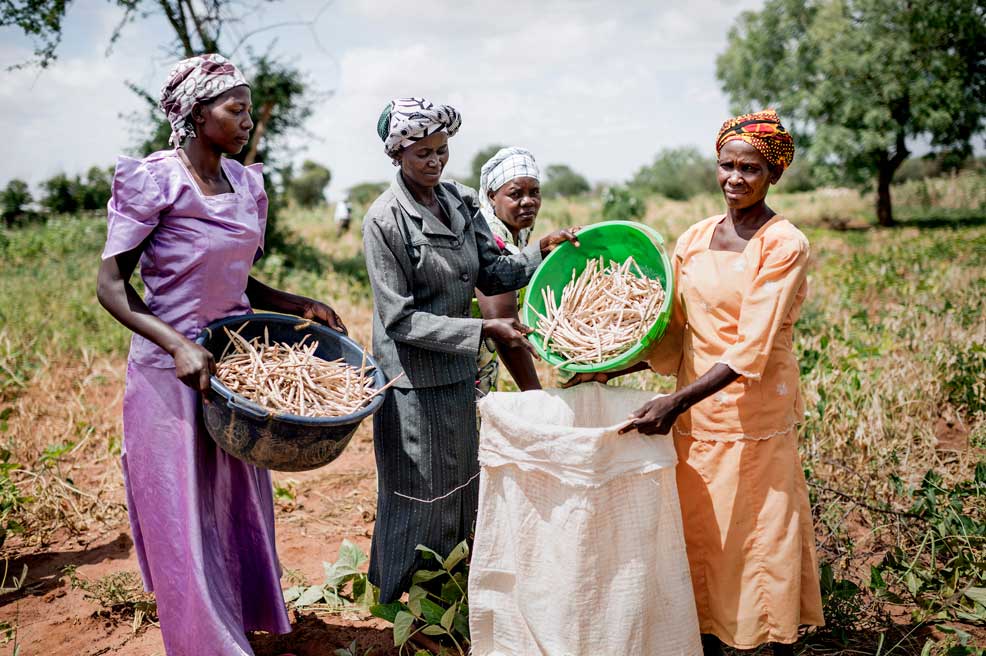 Farmers harvesting a cowpea crop. Cowpeas, or black-eyed peas, are an important staple crop in Africa. Last year, the Danforth Center helped bring a pest-resistant variety to Nigeria. The crop has potential to provide food security for millions of people and improve their health and well-being. Please consider supporting our work at danforthcenter.org/grow. (Credit: Panos)

Because of the nutrients it provides and its ability to survive in difficult growing conditions, cowpea is an incredibly important crop in semiarid regions across Africa.

It’s a dietary staple, with more than 200 million people depending on it for their daily protein. (In the Hausa language, the word for cowpea literally translates to “meat for the poor.”)

Nigeria is the world’s largest producer and consumer of these legumes. Yet more than 40 percent of cowpeas consumed in the country are imported. Why? Because while the crop can tolerate drought and poor soils, it is susceptible to attacks from an insect known as pod borers.

When they attack, these insects can devastate yields, leaving farmers and families with next to nothing. Until recently, the only way farmers could combat these ravaging pests was by spraying their crops with dangerous pesticides six to ten times throughout the growing season, a costly and dangerous practice.

But everything changed last year when the Danforth Center helped an international collaboration bring pod-borer-resistant cowpea to Nigerian farmers, a historic milestone that could improve lives for generations to come.

The improved cowpea has been field-tested in Nigeria since 2009, and research and regulatory work demonstrate nearly complete protection against the pod borer. It is expected to increase yields by 20 – 80% and significantly reduce both pesticide use and Nigeria’s reliance on imported cowpea. 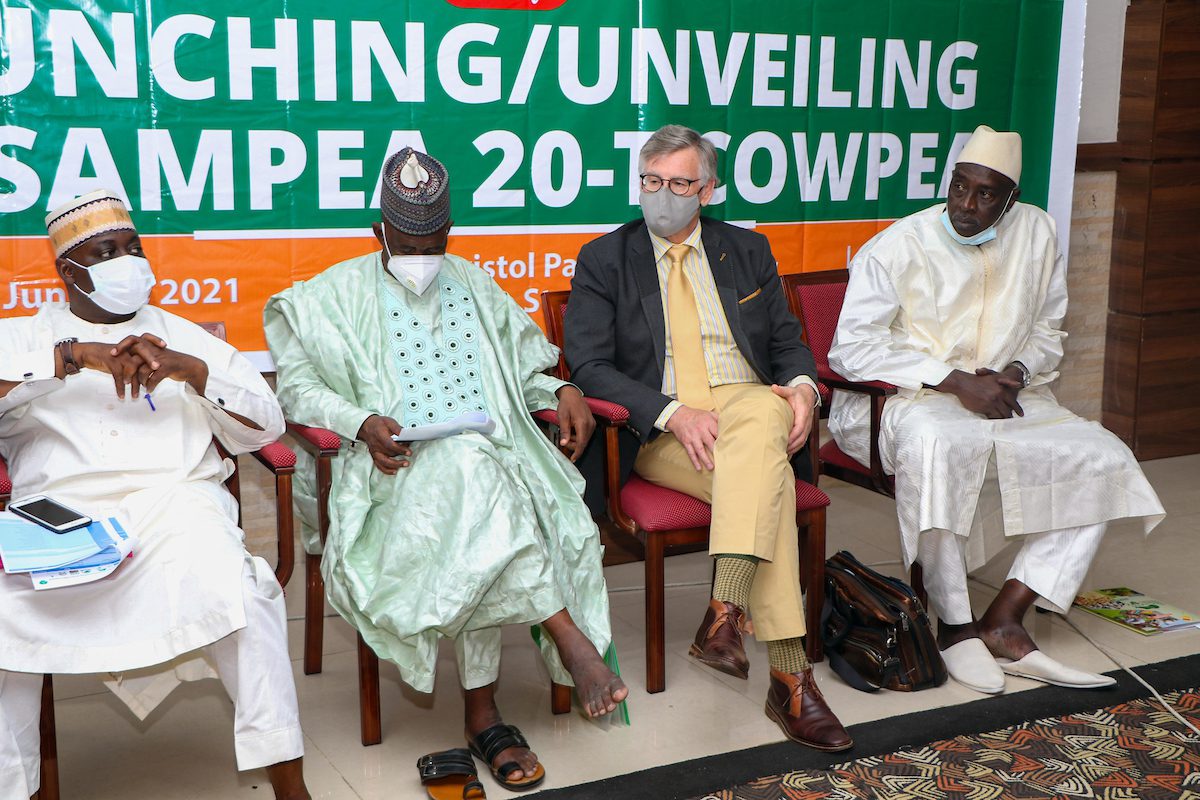 The first seed batch of the improved variety was released on June 29, 2021 at a special ceremony in Kano, Nigeria and quickly sold out. In attendance was Don MacKenzie, PhD, executive director of the Danforth Center’s Institute for International Crop Improvement (IICI).

The IICI was one of many international partners who helped bring improved cowpea to life and was particularly instrumental in securing final approval from the Nigerian government—moving the decades-long project over the finish line.

Seeing that innovation in the seed bag, ready for delivery to farmers, is the ultimate reward. Now our job is to ensure that farmers have a good experience and that the benefits are sustained.

Right now, efforts are well underway to ensure that even more people can reap the benefits of improved cowpea. Just this year, the crop received regulatory approval by the government of Ghana, paving the way for national performance trials and eventual sale to Ghanaian farmers. Regulatory work is also underway in Burkina Faso. 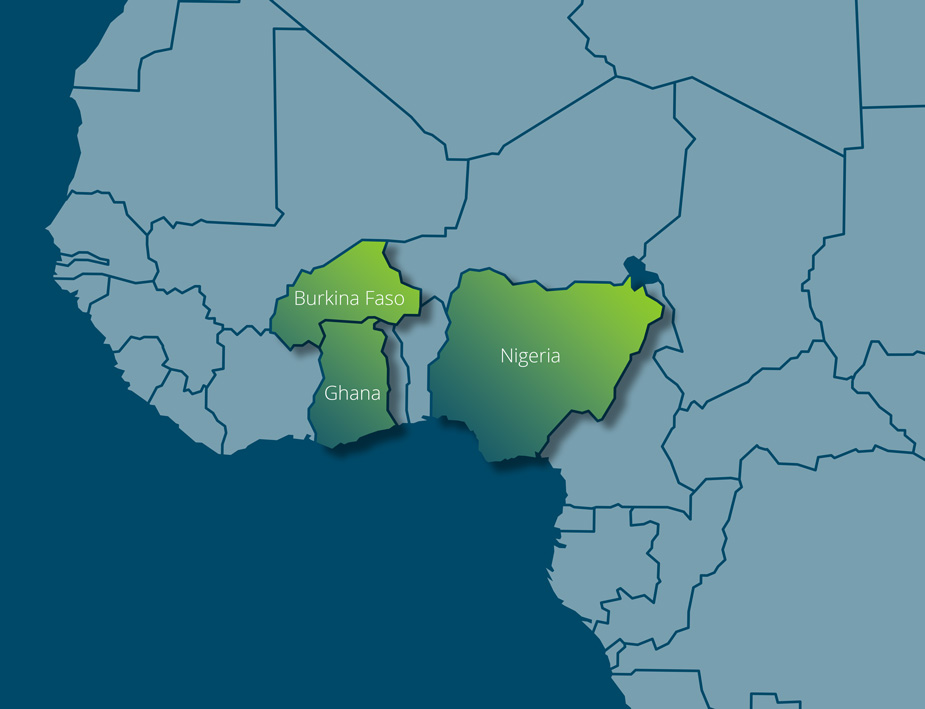 Last year, the Danforth Center made history by helping launch pod-borer resistant cowpea to farmers in Nigeria. The Center is currently working to bring the improved crop, which will increase farmer’s yields up to 80 percent, to Ghana and Burkina Faso.

Improved cowpea offers a real solution to food insecurity for farmers and families in West Africa. But lack of access to proper food is a problem right here in our own community.

“Food Deserts” are regions where quality, nourishing food is all but impossible to acquire. With few other options, the people who live in these regions instead rely on cheap, processed goods that negatively impact their health and well-being.

Here in our own backyard, nearly 86% of East St. Louis residents live in a food desert. But we’re hoping to change that.

A New Center for our Students 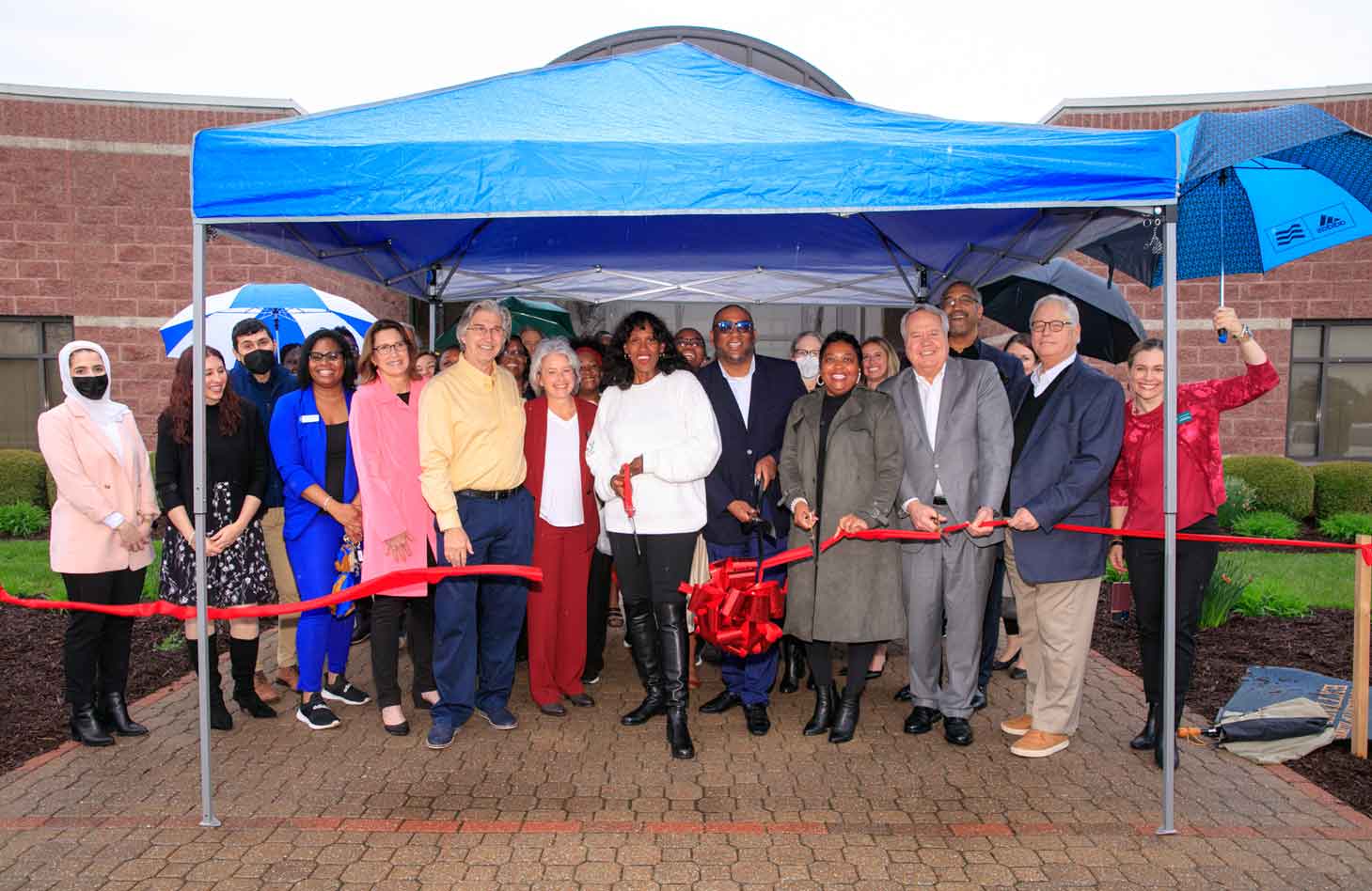 Ribbon Cutting at JJK FAN. This new Danforth Center partnership will help transform lives in the region through unique STEM education programs. Help bring those programs to life by donating to the Grow Challenge today. Visit danforthcenter.org/grow to donate.

Here, students will experience the transformative power of STEM education. Through unique programs developed by the Danforth Center, JJK FAN will combat education and health inequities—empowering youth in our region to discover the scientists within themselves.  These young students will learn to grow healthy, nutritious food, and take a crucial step in transforming their community from a food desert to a food oasis.

Join Us in Building a Brighter Future

The Grow Challenge Week of Giving (Sept. 19 - 23) is an online peer-to-peer giving campaign, spearheaded by the Danforth Center Young Friends, to support the work of the Danforth Center. Early donations are being accepted now. Click here to learn more or donate today.