Ten years ago, the Ag Innovation Showcase began its remarkable journey to curate technologies, converse about trends, and cultivate a community of innovators, investors, and influencers who are driving the future of Ag.

The event has established a loyal following. Nearly 4000 people from 26 countries have participated. The panels, presentations, and spotlights have charted the arc of innovation in agriculture, exploring the convergence of the food, health and energy sectors. On September 10-12, 2018, 500 people from around the globe attended the tenth annual event hosted by the Danforth Plant Science Center and organized in partnership with Larta Institute.

Nearly 200 technologies have been presented. Central to this year’s event was a celebration of the accomplishments of alumni companies, many of whom have broughttheir ideas to fruition and are key players in the industry across the value chain. Companies that have presented at the Ag Innovation Showcase have collectively raised more than $1.1 billion following their debut at the showcase, with 6 successful exits through acquisitions.

“The rapid growth and success of the Ag Showcase has positioned the region as a global leader of innovation, and has helped established new networks, companies and investments that are accelerating sustainable agriculture world-wide,” said Sam Fiorello, COO, Danforth Plant Science Center and President, BRDG Park.

The tenth anniversary theme, “From Farm to Plate” underscored the commitment of the 2018 Showcase to establish clarity, dialogue and excellence in a time of increased consumer scrutiny and interest and demand. Topics included plant nutrition, logistics, traceability and high value foods. 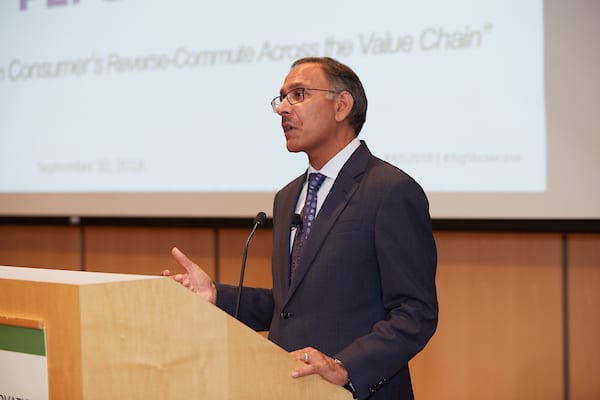 They also heard from Chris Chinn, director of the Missouri Department of Agriculture, a fifth-generation farmer, who has been an early adopter of new technologies to streamline processes and expand productivity on her family farm in Shelby County, MO.

Chris Chinn, director of the Missouri Department of Agriculture

The Danforth Center and Larta Institute extend a deep appreciation to our sponsors, who are not only the financial pillars of Ag Showcase, but contribute as speakers, thought leaders, and curators for many facets of the event and to our advisors who have given their leadership, energy, and enthusiasm to make this a truly unique and productive gathering.